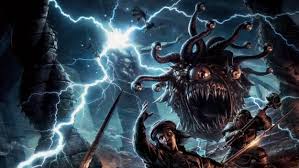 For my first DM campaign I spent a while looking at ones that were already written. I am confident in being able to create a captivating story but wanted to have something tried and tested to base my story off.

I chose to base my campaign on The Cavern Of Midnight’s Fools by Daniel Casey. The basic premise is that the players are a group of Yugoloths and have been selected by the Gerneral of Gehenna to retrieve the Book of Keeping, before the cult that has it, completes a ritual that allows them to open the book and learn the true names of all the demons and thus control them.

The setting is in caverns deep inside a mountain range and it is a dungeon set up, so no outside the cavern world needs prepping.

Daniel wrote this campaign to be played in 2 ways. First the players, as yugoloths, navigate the maze of caverns to reach the cult and interrupt the ritual in time, battling many different enemies on the way. The second which I really wanted to do but felt that I needed to keep a smaller group for my first session of being a DM, was that the players are split into 2 groups, The Yugoloths and the Devils and they are not only battling enemies in navigating the caverns but it is also a race to see which group gets there first. This would also mean that the Yugoloths and Devils may bump into each other before the end cavern (they start at different sides of the maze) and could then engage each other. I am thinking that as the maze layout can be altered and as the players will not be able to explore all the caverns I think I may run it again in the future with some changes and 2 groups of players.

Over these next pages you will be able to follow my journey into my first campaign as a DM. I will show you items I will be making for my battlemap and will document all aspects of my planning and prepping and eventually update the page with the campaign diary , along with photos, videos and hopefully a recording of the session. We do record all our sessions but they are not all suitable for upload as we have 2 dogs that can get a bit noisey in the background.